Phurba Phuba
Phurba is from the remote hamlet of Dangchu under Wangdue Dzongkhag. He started his education from the last hut of erstwhile Dangchu Community School and then to Nobding and to Bajo. After class X, he went to Punakha HSS and obtained his degree in Economics from Sherubtse College, an affiliate to Delhi University. Prior to joining civil service, he did his Post Graduate in Public Administration from RIM. He started his career with the Ministry of Education as an Asst. Planning Officer. Today Phurba is a Planning Officer at the Gross National Happiness Commission Secretariat. He obtained Master in Economics from the Australian National University.

Many regard their college life as the best part of their life. Indeed, it is. Though, most of us can only realize this when we are out the colleges. College life was entirely different phase. The college rules in our time were not as same as that many of us experienced in the schools. I guess that the collegians were considered matured enough to know what they are for. Therefore, up to certain extent, we can loosely say that there was freedom in the college.
We attended the classroom lectures which were not so rigid. Free periods were often, unlike in the schools. Home works and assignments, unless one was voracious learner, were never able to fully engage us. At times, we became so lazy that we kept our assignment till the last minute. Overnight, we complete our assignments, mostly by copying from our mates who were relatively sincere. Most of us never do research on the assigned works. Many got bogged down with studies only when the exams were approaching frighteningly. Under such circumstances, we tend to explore many things, not necessarily relevant to one’s life. For some, visiting the bars had become almost like a timetable and for other frequency of bar hopping increased with the passage of times and it had never spared even the innocent person. Another unforgettable moment was of course, some of us visiting libraries for studies. There were whole blend of friends which keeps the class up and running. The class was not silent even for a single minute. Boredom was out of question. Most of our friends celebrated their birthdays for the first time in the college inviting their friends to make it their days. While for some, they as well tried different games and sports and other co-curricular activities for the very first time. Different categories of get together were organized such as class gatherings, hostels, friends, home town, etc. to name a few.  Many anniversaries were celebrated and different excursions were carried out. Amidst of such activities, gone were those three years unnoticeably. We were sentimentally touched when our juniours bid farewell. Never the less, we must have grown much wiser and matured both in terms of age and intellects through those eventful journeys.
Soon after graduation, the most visible scene among our friends was photocopying of documents and get hold of every available news papers to see the job advertisement. After this short hick up, today we are now engaging ourselves in the world of work. Some of us work for government and some for corporations and yet another for private sector. A few enterprising friends are into business of their own. All of us are now so busy in our own work irrespective of agency in this dog eat dog era. We have to meet deadlines and achieve targets at the end of the day. The situation becomes worse when our bosses ask many ad-hoc works in between. This is enough to make us work round the clock. It is our tendency that we forget many things including our friends when we are fully occupied in our work. Sadly enough, the situation is further worsened by the sheer distance. Our friends are dispersed across the country working in different capacities. Under such circumstances, gatherings and fun that we used to have in college life can now be hardly accommodated in our agenda.  It is just too difficult. 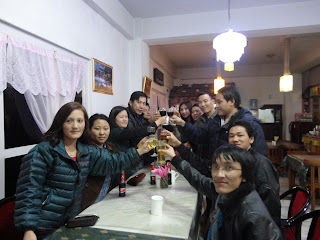 No doubt about the difficulties in getting together but it is just too far from impossible. Realizing the value of our friendship some of us thought it will be not at all early to have a reunion gathering. As such, a few of us threw the ideas in the social net working sites. The response was as expected, overwhelming. Thanks to modern technologies and communications, the coordination was not so difficult. It was ever heartening to see some of our friends travelling all the way from Bumthang and Phuntsholing. These were the pure indications of how much we value each other. We welcomed each other with the tight hugs. At the gathering we were enlightened by sharing what we have been doing ever since we graduated. Worthy experiences were shared and interesting jokes were cracked. Wonderful ideas were also exchanged as always which enriched many and a good way forward for others. Of course, the meals and drinks were good but we forgot the taste as we were fully engrossed with our friends since it has been four years passed. Some of the best songs were sung and dances were danced. By the time we realized, some of us were already drunk. Now let me stop at this point. It is too long to end as volumes can be written. Such type of gatherings is too valuable to be forgotten at one moment. This will last forever in our heart. To revitalize, we have decided to have such gathering annually, at least. We departed with our hope full to have more friends in our future get together. The additional value was added by a night party organized by one of our friends which kept us fresh even at midnight. Let’s pray for our kenchosum to bless us as always. We cannot turn back the time but we can plan for same events.
Posted by Phurba Phuba at 11:43 AM No comments:

Beggars; the Economics Theory in Play

It was Saturday, November 05, 2011. As usual, I went to the weekend market in the Centenary Farmers’ Market and to other side of the rivers where the clothes and other crafts were sold in Thimphu. Just before crossing the bridge, I saw a few beggars. This particular scene allowed me to think about my vague and almost forgotten economics theories that were learnt in my college days.
Beggars were not found in this very place during others days. I asked myself why they are not found on weekdays. This is where they apply their marketing strategies which today companies paid a huge amount hiring employees for marketing and in advertisement.
For the success of any business, a proper location is of utmost important. This is not an exceptional for the beggars’ economy. During the weekends they flocked to the vegetable market where people from all walks of life gather. Even in that particular location they were never in the same place. They have their own place.
People donate hundreds of thousands for the political parties and in their worship place. But we are very reluctant to give even a few bucks for the beggars. The situation becomes worse when there are many beggars in the same place. Too many beggars spoil the show. Generally, people are willing to give some amount where there are only one or two beggars. But the same willingness disappears when too many beggars flock together. The rationality is understood by the beggars and they will have their own designated place. This is called market distribution where there is large competition. I have no idea on what basis they have distributed the market, may be through muscle power or mutual understanding.
Most of the beggars found in Thimphu are not originally from here. They are probably from across the country. This shows they are highly mobile. They are indeed well informed about the market opportunities but obviously not from the written communication as most of them are illiterate and also lack of facilities. Information is passed mostly from the words of mouth.
Once they have chosen the market, they use the same principle as the multinational companies. They will look at the place where there are opportunities. The same economics theory is in play where vegetable market is less preferred than memorial chorten during the auspicious days and changlingmethag during the big event.
There are different models of markets in operation. I saw a couple. This reminds me of partnership model where the liabilities are unlimited. The wife begs from shop to shop using a rosary as a symbol of being ardent religious practitioner. Husband follows his wife but silently begging from the passerby.
Most of the beggars are sole proprietorship where the liability is even more unlimited.
There is also collusion among the beggars. If we are happened to be in the border town of Jaigon, the scene of colluding market is rampant. Often it seems there is only a single beggar. However, after we give a few amounts to him/her it will be followed by an endless. This is where colluding market is preferred over the so called competitive model.
Another interesting thing is that at times, the street is free of beggars. This is the time when there is less traffic and people in the town. It is usually the time where shopkeepers are relaxing and it is not peak hour. Beggars do have fixed time like peak and non peak hour for any forms of market/business.
This is a small incident where I tried to relate theories into practice thinking of beggars’ economy. Beggar’ economy is no different from any metropolitan city’s economy from my myopic view.
Posted by Phurba Phuba at 3:02 AM No comments: